Our proprietary technology, the F-Cube, is the world’s first intelligent and interactive touch-based device for Football and Fitness assessment and monitoring. It was launched by the then Honorable Sports Minister of India at the Jawaharlal Nehru Stadium in 2014.

Since our inception in 2012, TFL has organized numerous football initiatives and programs, and continues to strive for more. 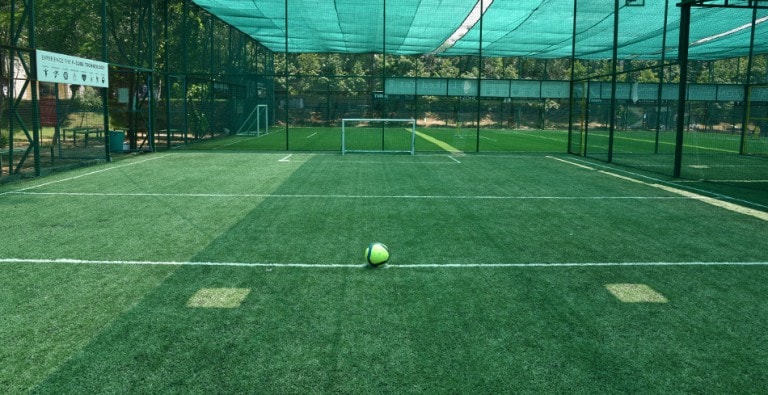 Chetan Misra graduated from Delhi Public School, RK Puram, New Delhi, completed his Electrical Engineering/Economics degree from Georgia Institute of Technology, Atlanta and then worked as a Research Engineer in Washington DC. Chetan returned to India in 2010 with an aim of deploying immersive tech in the Indian Football ecosystem. He is currently spearheading Zinc Football, as a Turnkey Strategy and Implementation Partner of Hindustan Zinc Ltd, a Vedanta Group Company at Zawar, Rajasthan. As part of this CSR initiative, F-Cube Technology is being used to monitor, assess and develop football skills at scale across 64 villages and 2500 children. Prior to that, he set up his own F-Cube-powered Excellence centre in Vasant Kunj, New Delhi.

A Football Association (FA) England Level-2 coach, he has worked with more than 25,000 Football players, both boys and girls across various age groups and socio-economic segments in India. He has been instrumental in developing the Delhi Police Yuva program for Football and has been felicitated by the Lieutenant Governor of Delhi for his work with underprivileged footballers. For his work, he has been recognized by Times Now-Amazing Indians, CNBC-Young Turks, Mahindra – Spark the Rise nominee at Times Now Awards, TATA-IIM Calcutta Top 20 social enterprise in India amongst many others.

Biraja Misra, chairman of TheFootballLink, has more than 49 years of experience in senior management roles in India and abroad. A Mechanical Engineer from BITS Pilani, he did his MBA from UCLA, USA and believes that sports can be a major game-changer in Indian society and has been instrumental in laying the ethos and vision of TheFootballLink.

His Football career of more than 45 years includes being the Technical Advisor of the Sports Authority of India, Under-17 FIFA World Cup team and the Head Coach of India’s premier Football training institute, National Institute of Sports (NIS), Patiala. He heads our Football Coaching Program and designs the training curriculum for children and coaches.

Suresh Kataria has worked with the Sports Authority of India for over 31 years and was an active member of the Sports Ministry Task Force for Under-17 FIFA World Cup, India. He has received numerous accolades such as the Sports Journalist Award for the Best Men’s Team in 1984 and the SGFI Best Coach Award in 2017 for his immense contribution to the game.

Nitin is an IT Engineer from the Madras University who has been an active contributor initiatives pertaining to Sports for Development. He has featured in numerous projects including the Cricket World Cup for the Blind (2017), where he was a key member in Strategy and Implementation. His passion to combine sports and social welfare led him to TheFootballLink.

Since its inception, TheFootballLink has been tirelessly involved with various organizations to spread the love for Football across different age groups, genders and communities, both privileged and underprivileged.

TheFootballLink has partnered with Hindustan Zinc as the Strategy and Implementation partner for Vedanta Hindustan Zinc’s flagship CSR initiative, Zinc Football based out of Udaipur, Rajasthan.

TheFootballLink has a 5 year MoU with the Sports Authority of India to develop grassroots Football in the country.

Coaches Across Continents is a global Sports for Development (S4D) NGO that works with organizations and youth leaders across the world. TheFootballLink has been CAC’s partner since 2014 and organizes the Sports for ‘Social Impact Camp’ for Football Coaches each year.

WE HAVE WORKED WITH

TheFootballLink offers businesses experience and expertise to Plan, Strategise and Execute Turnkey Football Initiatives while connecting key stakeholders in the Indian ecosystem. Football has seen a meteoric rise in its acceptance and popularity across the country and TheFootballLink is the best placed to understand its impact in execution.